OCTOBER 17, 2022 - UPDATE - Installation of the new storm drain has been completed. The three existing catch basins near the Park St./High St. intersection will now convey stormwater to the storm drain rather than the sewer. This should improve the operation of the sewer in this area and reduce overflows during rain events. We are working with our paving contractor to patch the roads before the end of the paving season.

AUGUST 5, 2022 - UPDATE - Regarding the storm drain improvement project, approximately 225 feet of pipe has been installed, starting at the existing catch basin on the corner of Denny Rd. The first drain manhole structure has been installed. Unfortunately, the intended path of the new storm drain has been interrupted by an existing sewer line that was not where it was expected to be. The sewer pipe must now be shifted over a few feet to make room for the new storm drain. The project will take a bit more time to complete. 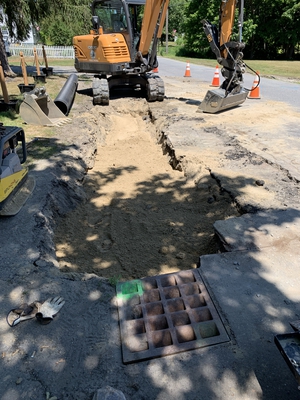 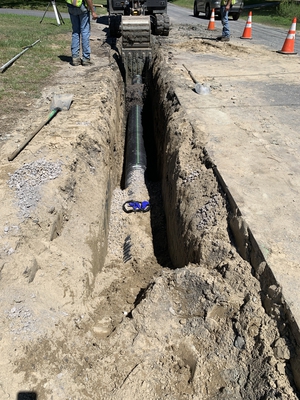 Regarding the retaining wall replacement, the project started with excavation of the existing, northernmost retaining wall. The new wall blocks have been placed and the wall has been backfilled. Work is now progressing on the second wall. The existing wall was excavated and the first layer of new wall blocks is in place. Work will continue southward. After the walls are completed, the sidewalk and road pavement will be removed and replaced. 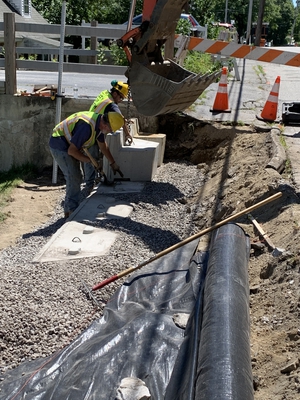 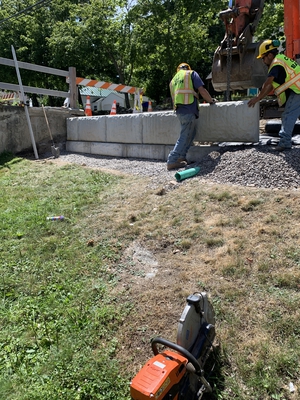 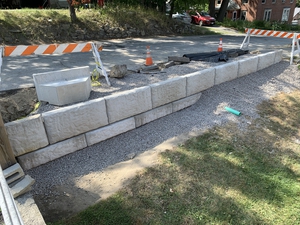 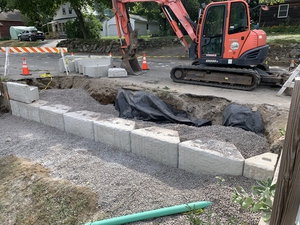 The first to start on approximately July 18 will be a storm drain improvement between Denny Road and Park Street. A new storm drain will be installed along the west side of the road. There are three storm drain catch basins in the Park Street/High Street intersection. These drains are currently connected to the sanitary sewer system. During rain storms, the flow degrades the operation of the sewer potentially causing overflows. The drains will be connected to an existing storm drain near the Denny Road/High Street intersection. This project will last about one month depending on weather.

The second project will start on approximately August 1. It will be a replacement of a series of retaining walls along the east side of High Street between Oliver Street and West Milan Street. Five different retaining walls will be replaced. Following replacement of the walls, the existing sidewalk will be removed and replaced. Finally, High St. will be repaved between Beacon St. and Prospect St.  This project will last about two months depending on weather.

It is not anticipated that either project will require the full closure or detour of High Street for extended periods. There will be short periods when building materials will be moved with heavy equipment, and during the paving operation, when traffic may be temporarily stopped.