The City of Bath has started a project to construct new and modify existing storm drains and sewers on Western Ave., Academy St., and Cobb Rd. In addition, sewers will be relined near Seafarer Ln., on Commercial St., and on High St. near Academy Green. St. Laurent and Son, Inc. is the general contractor and Wright Pierce Engineers will be on site during the construction to monitor the contractor's activities and to act as a liaison for residents to ask questions an communicate concerns about the work.

Residents should expect to see workers in the area. They will be clearing yard areas, excavating for pipes in the road and in yards, installing liners in existing pipes, repaving streets, and reestablishing landscaping. Some of this work will temporarily interrupt travel along these roads. If your property will be affected, the contractor and/or engineer will come to your home and/or leave a notice with more information. Please also be prepared for occasional dust and noise in your area.

If you have questions about this project, please call the Bath Public Works office at 207-443-8357 or email pwinfo@cityofbath.com

This page will be periodically updated with information as the project progresses.

October 17, 2022 - UPDATE - Work has been completed on this project. The City thanks all the impacted residents and businesses for their patience while these important improvements were under way.

May 5, 2022 - UPDATE - Contractor has installed new sewer line from Lincoln Street, through Cobb Road, through backyards, and is near the connection with a manhole on Academy Street. The hard ledge finally subsided, but working between homes and in the residential yards is challenging. Not least for those residents. We thank them for their patience. 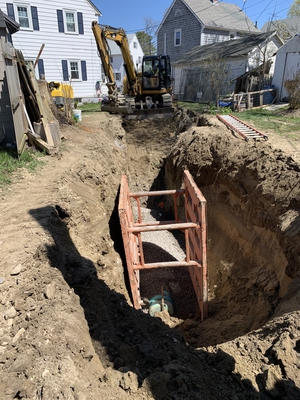 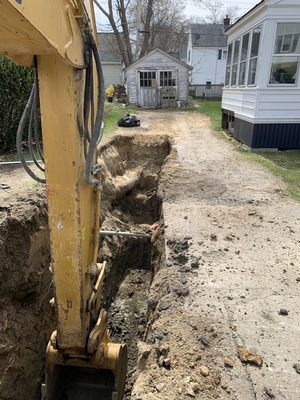 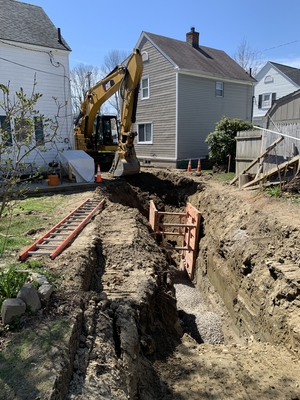 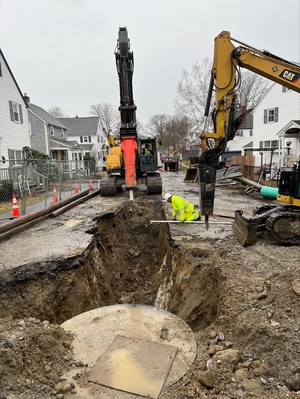 April 1, 2022 - UPDATE: Academy St./Cobb Rd. area: The contractor continued to excavate deep ledge to install the new sewer line and manholes across Lincoln St. and up to the intersection of Cobb Rd. They are cutting a slot up to 10 feet deep into hard rock. It is expected that the ledge will not be present as work progresses west on Cobb Rd. The work has been complicated by the presence of existing utility lines for gas, water, other sewers, and storm drains.

March 9, 2022 Update: Western Ave./Cottage St. area: The contractor has completed installation of new storm drains and has connected eight existing catch basins to the new pipe system.  Those existing catch basins included six on Western Ave. and two on Cottage St.  The excavated areas were loamed and seeded, and hay mulch was applied.  The sewer relining in this area has also been completed.  Remaining work includes reconstructing a portion of curb & sidewalk on Western Ave. and installation of new catch basin frames and covers.  That work will take place later in the spring.

Academy St. / Cobb Rd. area: The contractor has excavated and backfilled several test pits in the work area to locate existing utilities and identify conflicts.  There are two existing sewer pipes that cross Lincoln St between Cobb Rd. and Andrews Rd.  One of those was to be replaced, and test pits highlighted that the pipe is not where it was expected.  The replacement plan was adjusted and a new manhole is to be installed along the east side of Lincoln St.  Significant ledge was found in this area and the contractor has elected to pre-drill the area where the sewer is to be replaced.  The contractor plans to remove the ledge with a hydraulic hoe ram and no blasting is expected.  Work will proceed upstream from Lincoln, to Cobb, and through backyards to Academy.

Sewer Relining: The project includes 5 separate portions of existing sewer to be relined:

At this time all of the relining work has been completed except a portion of the sewer near Seafarer Ln.

1/14/2022 Update: Western Ave./Cottage St. area: The contractor has cleared the right-of-way/easement. New storm drain piping and several drain manhole structures have been installed. The first segment of existing sewer has been cleaned, video inspected, and relined from Cottage St. to the east.

Dike Newell area: The contractor has installed the valve structure on the existing sewer. The gate valve has been attached to the wall of the structure. Bypass pumping is being used to move sewage flow around the project area.

12/1/2021 Update: St. Laurent & Son will be starting work in the Western Ave area on or about December 13.  They will be clearing the right-of-way, excavating to install storm drain pipes, and backfilling.  Work will include excavations in Western Avenue and Cottage Street.  The project is expected to take approximately 2 months.

Granite Inliner will be starting work on December 13.  Initially their subcontractor Inland Waters will be cleaning and video inspecting the sewer pipes to be relined.  By mid-January Granite should be installing pipe liners.  The expected order of work by location is: